I was trying to decide what I wanted to write about next. I kept seeing people on Reddit get all googly-eyed about buying AT&T or Verizon stock because of the correction today. They’re cheap! As if that is a good reason to buy a stock. I can’t pass up that big AT&T dividend!

I’m going to be blunt-I don’t think they are thinking this through. Both of these stocks look horrible to me and I wouldn’t touch them with a 20 foot pole in someone else’s account. Ok, maybe if it was someone I didn’t like, hahaha.

Both Verizon and AT&T are both ridden with debt, have management issues, are losing market share, and present little to no growth. Do you need a dividend that bad?

Dividend Growth of Verizon vs. AT&T

So, you want to buy Verizon for the dividend?

What about AT&T? Is it any better?

Dividend Growth = NEGATIVE, I’ll end it there. They cut the dividend. There is absolutely nothing to say they won’t reduce it again or even more the next go around.

Dividend Score is a F

Debt levels for Verizon and AT&T

Honestly, I’m amazed that Verizon looks even worse than AT&T when it comes to debt. Once again, why would I invest in these companies over a basic Total Stock Market ETF or Mutual Fund that collectively doesn’t have such debt levels? Especially in a high interest rate environment? Especially in an environment where those interest rates might go even higher? Almost seems like the worst possible place one could be.

A few other side notes: Verizon has less cash in hand than they ever have. 1.66 Billion Cash on Hand. Meanwhile, their long-term debt is 140 Billion and Total Liabilities are 280 Billion. That’s a heck of a pickle. Sure, a lot of it is at lower rates. However, that is a ton of debt.

Score= Both get an F

This is where the noob investor says, look at those incredible P/E values, it’s cheap, time to buy. Hello? Look at the Cash Flow Growth Rates. These companies have barely grown their cash flow in the last five years. AT&T looks absolutely horrible. Verizon’s 5.6% is nothing to write home about. I wonder what the average Cash Flow Growth Rate of the Total Market is?

Some anecdotal evidence for you-My Home internet is with AT&T, but my Mobile Phone is with Tmobile. I recently had my AT&T internet repaired and after the repair was over, the guy’s supervisor came out to my house and attempted to get me to switch from Tmobile. This is their new tactics for trying to get your business. I think they are desperate. NEWSFLASH-I didn’t switch (it was too expensive, even with all of the discounts he conjured up).

I left Verizon for phone service many years ago. I got tired of the contracts and increasing prices. They are losing consumer subscriptions and I’m sure it’s because they went up on their prices too much. I literally don’t know a single person that has Verizon as their mobile carrier.

Granted, past performance doesn’t indicate future performance. However, I see nothing to make me believe that this is going to change. Here is a graph of VTSAX vs. both AT&T and Verizon since 2009

I picked another random year to start (2018). Here are the results. ITOT 9.15% CAGR, AT&T -1.02%, VZ 3.56%. I literally just saw a guy say he bought Verizon because it was like a bond. No it’s not. The opportunity cost of holding either of those stocks over the Total Market was big. As Ben Felix loves to say, “Dividends are irrelevant.” You probably already know, I don’t take his extreme approach, as I do like some dividend stocks. However, neither of these stocks is a quality dividend stock.

I have to give T its due. Over the last year, it has outperformed the market. However, that is an extremely short time period, and as of today, things are not looking good. It was an awful earnings report. 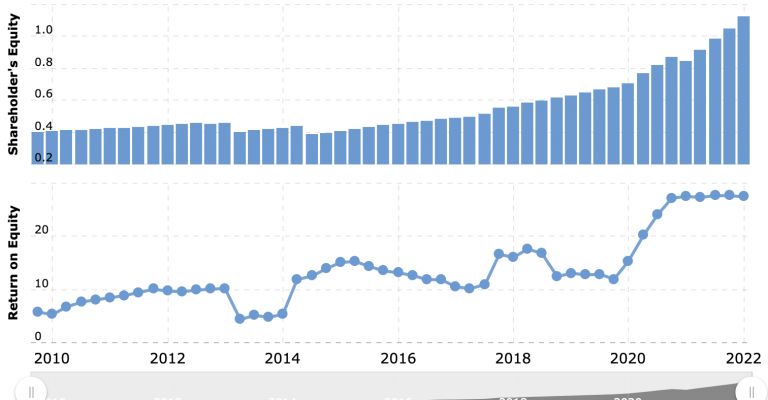 About Ingles Grocery: Ingles is a grocery store chain in the South Eastern United States. I used to shop there years ago; however, my local store closed down about 8 years ago and now there isn’t one near me. They used to have some really great Country Ham (ok, I know this is about stocks,…

Wal-mart is one of those stocks that’s often recommended as a Recession-proof stock. It’s also often recommended for a Dividend Stock portfolio. However, I’m going to go against the tide and say at this current price and valuation, I can’t recommend this stock. Why I don’t like Wal-mart stock DECLINING TOTAL SHAREHOLDER EQUITY 2017-77,798,000; 2018-77,869,000;…

I started the first week of 2020 by buying more Netflix and Akamai. I want to increase tech/growth exposure in my portfolio going forward. What have I sold? I sold all of my Kroger in my IRA for around 17-18% profit, I sold all of my shares of 3M for about a 5% gain, Verizon…

1)Buy and Hold is a great strategy but not ALWAYS the best strategy. I have had serious winners (up 30%) turn to losers (down 30%) in a hurry. I held on because I believed in buy and hold. Meanwhile, I would have been better off to take some off the table. I ALWAYS take a…

So, over the last month I’ve been doing more SWING TRADING. What is SWING TRADING? Swing trading is when you specifically buy a stock with the intention of selling it shortly thereafter. Hold times can be a few days to a few weeks. Home Depot (in my IRA): I bought this 3/16 through 3/20 and…