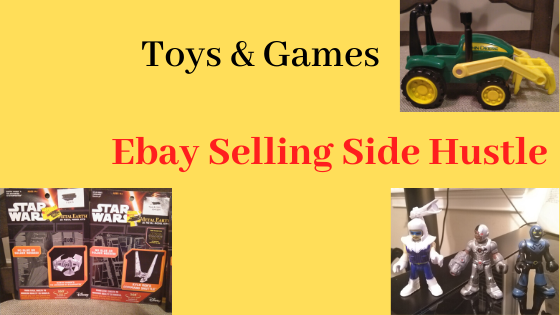 I think it’s time I give an update on my Ebay Toy and Board Game Side Hustle. These are just a few of the sales I made. I am getting better at the “business” due to more efficient listing methods as well as improved shipping methods that are reducing shipping costs by around 20%. The NET PROFIT listed is how much I made AFTER FEES/SHIPPING/ETC. While the smaller items don’t net me as many profits, they are SO much easier to deal with, just throw in a bubble mailer and be done with it.

1)First up we have Bakugan Brawlers

5)Pokemon Energy Cards; now I paid $3.50 for these cards but I also got a TON of cards plus a collectible tin as shown below. So these energy cards are only like 1/5th of the cards.

Before it’s over with I will easily make over $20. NET PROFIT on these energy cards is $3.34 so far

Imaginext Toys; now this came from a HUGE lot of toys I have $25 total in, Martian man netted me $5.45

From the same lot-Spiderman Imaginext Toys NET PROFIT of $5.65

So, I’ve already got a net profit of $18.92 from that lot of toys and still have TON left to sell.

I am still learning and getting better at Ebay. I TRIED Facebook Marketplace with limited success. There are just way too many flakes, weirdos and the like. I would rather list on Ebay, be done with it and not have to deal with the type of people on Facebook.

The goal of this side business is to just bring me a little extra income which I can use to invest and pay expenses with. At the moment I have over 80 listings on Ebay and you just never know when an item will sell; it could take two days, it could take two months. I’m not increasing my inventory because honestly I already have enough stuff laying around to sell.

To start a SERVICE BASED BUSINESS, you need to find a problem and solve it. Here are a couple of ideas to get your brain storming. These aren’t the only ones of course but hopefully enough to get you thinking. 1)Music teacher or private music performer (This is what I do!) 2)DJ-Maybe you like getting…

I’ve sold very FEW things on eBay this past month. This was partly due to mostly concentrating on cleaning things out at my parent’s house and trying to sell those things for my mom. Not to mention just scrambling to increase my online music business in a bunch of different ways. I lost about $400…

It’s been a bit since I reported on my side hustle, how is it going? Well, I’m still selling off some of the toys and board games I bought over a month ago. The thing with inventory is you don’t know when it will move necessarily. However, this week started off good, I did manage…