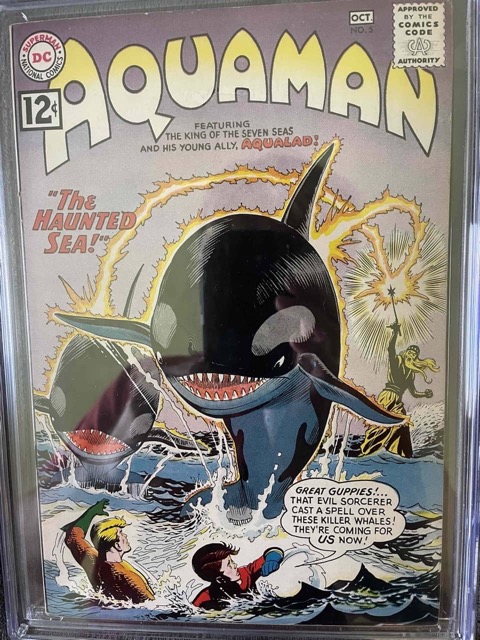 It’s been a good bit since I checked to see how my graded comic books have been doing. I use the word “investment” lightly here, because I buy comic books as a hobby. Although most of these I bought because I like the characters and books, some of them I did buy as investments. The majority of these comic books are silver age or older books, only a few from the modern era.

My methods for this Comic book vs. Stock market Comparison

For my stock market standard I chose the total market ETF ITOT. I’m doing this because that is what I own and I think it’s a good representation of market returns. The goal is to see how my comic books stacked up against the performance of the stock market in the exact time duration from when I purchased the book until now.

First off, getting an objective PRICE on a graded comic book is difficult for a number of reasons

Please note, that any prices I give are taking into account fees I paid. Shipping costs are passed on to the consumer, so those are NOT included.

As you can see, Silver Surfer has SURFED on by the stock market and returned over 30% more. Silver Surfer is a fan favor character and his books continue to increase in value.

Daredevil #168 outperformed the stock market even more, by a whopping 54%. Daredevil is my favorite character; I will never sell this and monetary value isn’t a major concern. However, it’s interesting to see how well this performed over time. This is the first appearance of Elektra. First appearance comic books have a history of increasing in value more.

I will preface this data by saying there isn’t enough volume or data to give accurate numbers on this book. I can tell you I got a HECK of a deal on this book because it had some small swirls in the plastic on the protective case (no on the book itself). The best I can guesstimate is the market is putting a $275 price tag on this book. That is from a sell that happened three months ago.

Aquaman is a DC book which are known for being worth less in most cases; It has seriously outperformed. Once again, Aquaman is my second favorite character so I bought the book because of the character and I LOVE the cover. I one day want to put it on my wall.

I have my first loser. I bought this book after watching the TV show and really enjoying it. I’m down in this if I ever wanted to sell it (out about $30-40). I can’t see myself selling it but maybe one day if I get desperate for some TAX LOSS HARVESTING. During this same time, the stock market is up over 13%.

I must tell you this is one of my favorite books, I absolutely love it and got a great deal on it. It features the Silver Surfer on the cover.

This is the best performing comic book in my graded collection; it’s up an incredible 129%. During that same time period the stock market is down almost 2%. I felt like I got an incredible deal on this book. It’s barely been over a year since I bought it and it’s went on to be a highly desired book.

This book has been on a roller coaster ride. I can remember when it got up all the way to $700. It was the most expensive book in my collection. Not so today.

Even though this book has fallen considerably from its high, it has still outperformed the stock market during this same time. This IS a book I bought as a comic book investment. I did research on the print run, which is highly limited. You won’t see a lot of these out in the wild and I plan on holding until the number available become less and less. It was one of the first appearances of character America Chavez whom I’m a big fan of. I think this book was speculated on a lot, they though America would be in a movie soon and it didn’t happen, so the book fell back down to earth.

Here’s another book that went on a ROLLER COASTER ride. It’ s been up over $200.

Yet another one of my losers. Agents of Atlas is my BIGGEST loser. It lost a whopping 40% of its value since I bought it. This was bought up as a speculation by collectors. Once again, they thought the characters were going to be in a movie and when that didn’t happen the price came back down. At the same time, I have no plans to sell it. The print run was pretty limited on this book and I still believe the characters will be further developed by Marvel in the future.

This book is one of my Pride and Joys. I wanted it longer than any other book I have. I didn’t get as high of a grade as I want (people have them priced too high!), but I love the cover.

I guess Fantastic Four Silver age comics are all WINNERS. This one has delivered a crushing 44% return in less than a year, while the market is down over 12% during that time. To be honest, I was leary of this one. I got tired of waiting around on the perfect copy to show up so I went ahead and bought. I felt like I had almost paid too much, but it looks like I didn’t.

This is another book I always wanted and I just kept waiting and waiting. I wanted a bit higher grade but the combination of price and timing was just there so I jumped on it. I didn’t get as good of a deal on it as I have my other books but it has done quite well. In five months, it’s appreciated 21% in value while the stock market has fallen over 9%.

There you have my results up to this point. 8 out of 10 comic books has outperformed the stock market so far. It will be interesting to see if these books hold up if we have a recession. Prices of collectibles are highly volatile, especially when there isn’t much volume.